Detail of Increase in Salaries in Budget 2016-17 for the Government employees of Pakistan is as under: 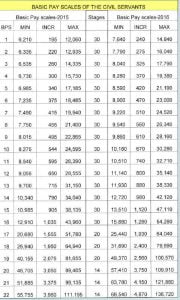